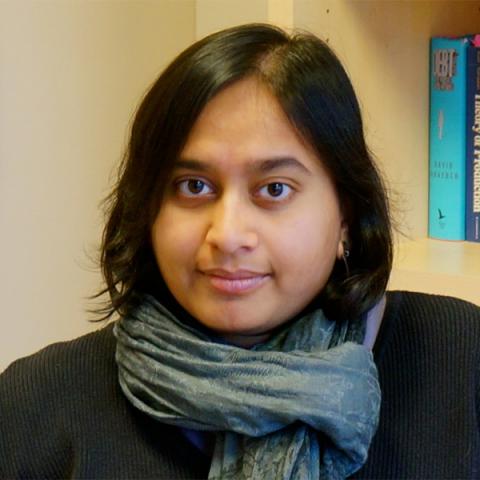 Poulomi Dasgupta is an associate professor of Economics and Finance at Franklin University Switzerland. She received her Ph.D. from University of Missouri, Kansas City with specializations in Political Economy and Development Economics and her masters from Mumbai university with a focus in Industrial and Monetary Economics.

At Franklin, she teaches courses on Political Economy, Development Economics, International trade, and Microeconomics amongst other economics courses. She has led travel courses to India, Bhutan, and Switzerland.  She is a faculty and co-coordinator of the master’s program in Political Economy of Money and Development at Franklin. She also co-manages the Franklin Frank Community Engagement Program. She is an alumnus of African Program on Rethinking Development Economics (APORDE) and is a Research Scholar with the Global Institute Sustainable Prosperity (GISP). She also advises a student led discussion group called ‘Rethinking Economics’.

Her research focuses on issues of employment and the informal sector in developing economies. In her dissertation, she used village level surveys in India and to investigate the impact of the National Rural Employment Guarantee Act on rural economy. Her other areas of research interests are care labour, sustainable development in developing economies, political economy of labour and critical pedagogy. Her work on employment, sustainable development and critical pedagogy have been published in various journals and publications like Springer and Palgrave. She has presented her work on topics including labour markets in colonial India, public employment and hunger at conferences including the International Initiative to Promote Political Economy, AFIT and European Labour History Network.

Dasgupta, P and Vogelaar, A. “Brand Bhutan and the Political  Economy of Sustainable Tourism” Chapter in Planning and Managing Sustainability in Tourism, Springer (In Print, 2021)

Selected and participated in the African Program on Rethinking Development Economics (APORDE) in Durban, SA. (Summer 2010)

Dasgupta, P. “Labour in India: Lessons from the Colonial Period”, Paper presentation at the European Network of Labour Historians (ENLH), 2015 in Turin, Italy