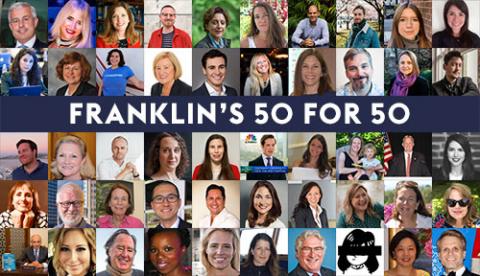 This week we're honoring 50 of our graduates as part of our year-long 50th Anniversary celebration.

This week, we’re honoring fifty FUS graduates who represent the spirit of this institution. The “Franklin 50 for 50” campaign is part of our year-long celebration, recognizing the impact that Franklin alumni have had and continue to have on our world.

It all began back in 1970 when four faculty members from Fleming College, Theo Brenner, Wilfried Geens, Pascal Tone, and Jacques Villaret teamed up with the chair of Fleming’s European board, Pietro Cassina, to found a new higher education institution named after Benjamin Franklin. They believed that, by providing international experiences to students, Franklin College would strengthen the relationships between members of different nations and cultures. They were right!

Franklin University Switzerland has survived many challenges to become a unique Liberal Arts educator with a strong international community. Over 7,000 Franklin alumni are now making their mark, as entrepreneurs, artists, diplomats, authors, scientists, bankers, international business people, and far too many other fields to mention here.

Rick Bell, who graduated in 1965, is the Chairman and Founder of Harvard Business Services, Inc. He’s now happily retired and living in Delaware, USA. “I just take one day at a time and am mostly joyous, grateful, and high on life!”

Our most recently graduated honoree is Karla Tadic (‘16), who received a B.A. in International Economics with an Emphasis in Political Economy. She has been working for almost three years at the European Parliament and the European Central Bank in Germany. Karla says that “Franklin was very important in my career development“ and she feels “extremely flattered and humbled to be among the honorees.”

You can see them all and read their quotes at “Franklin 50 for 50”.