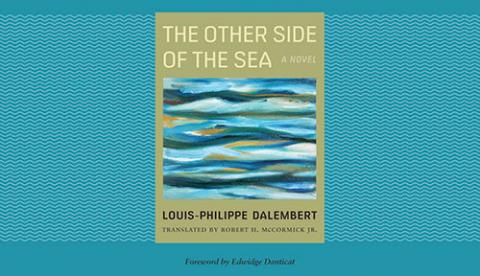 On the evening of June 17, 2015 in the Nielsen Auditorium, Professor Emeritus Robert McCormick read selected passages from his recently published translation of The Other Side of the Sea, a novel by Louis-Philippe Dalembert.

The construction of memory is one of the fundamental processes by which the workings of culture can be studied. Students in the Academic Travel course CLCS 220T Inventing the Past: The Uses of Memory in a Changing World explored memories of the Holocaust through its representations found throughout Berlin.

Professor McCormick, who retired from Franklin in 2011, joined the faculty as professor of writing and literature in 1988.  In addition to teaching, writing and research, Professor McCormick organized five editions of the Caribbean Unbound conference that explored the history, politics, art, literature, religion, film and music of the Caribbean and brought scholars and literary figures to Franklin campus.

Professor McCormick has taken advantage of his retirement and pursued his own creative writing as well as his ongoing research on Haiti and the Caribbean. His interview with Louis-Philippe Dalembert appears in the Spring 2015 issue of the Journal of Haitian Studies.

Professor McCormick's translation of The Other Side of the Sea is published by the University of Virginia Press.