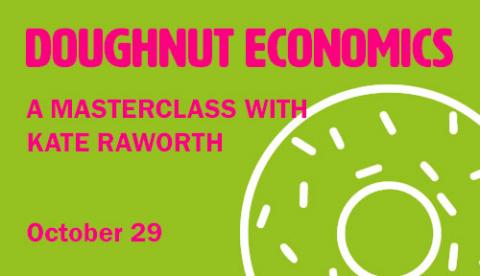 Tuesday, October 29, 2019 marked the second appointment with the 2019 Masterclass Series promoted by Franklin University Switzerland, this time organized in collaboration with the Città di Lugano, the Cantonal Department of Finance and Economics, the Università della Svizzera italiana (USI), and SUPSI, hosted at the Padiglione Conza in Lugano.

After the resounding success of the August Masterclass on the concept of “The Golden Rule" and its application featuring Paul Polman and other prominent and inspiring leaders, the University was pleased to present "Doughnut Economics - A deep dive into new economics and long-term thinking" by Kate Raworth, renegade economist at Oxford University’s Environmental Change Institute and author of the book Doughnut Economics: Seven ways to think like a 21st century economist, a Financial Times "Best Book of 2017: Economics”.

The free morning session, held in Italian and English, was dedicated to her presentation of the Doughnut of Social and Planetary Boundaries’ model and its application in a project developed in Amsterdam, as the city works toward a series of sustainable economic objectives that seek to bring about 100% sustainability by 2050, and was followed by an Open Space Innovation workshop to foster the methodology of collective intelligence and creative interaction, moderated by Franklin and SUPSI Faculty.

During the afternoon session, Raworth was paired with Roman Krznaric, a public philosopher who writes about the power of ideas to change society, for a workshop in which participants were asked to develop a role-playing dialogue between citizens of the future in the year 2050 and citizens of today, using the topics from the morning session as a basis for discussion and interaction.