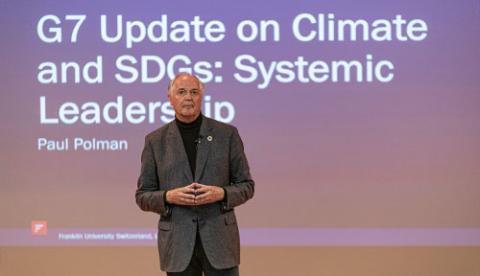 According to Paul Polman, who a few months ago stepped down from the vertex of Unilever to fight the effects of climate change, our individual efforts alone are no longer sufficient.

Polman was keynote speaker on campus at Franklin's Masterclass, "Leadership and the Golden Rule," this past August 30, 2019, which was part of an initiative launched this year in conjunction with the Executive Education and graduate studies programs. The event brought many important figures together on the same stage from around the world. Polman's address focused on his participation in the G7 summit in Biarritz and his efforts to bring together the “powerful of the world" to combat climate change. This was the first public appearance of the Dutch ex-CEO since the G7 summit, where he found availability and willingness to act, especially from Macron and Trudeau.

Having stepped down as CEO of Unilever last January, Polman decided to found the organizations, “Imagine” and “Valuable 500,” turning the experience, energies and contacts developed along his career path toward social objectives. “To resolve climate problems, 6% of the annual GDP worldwide would be enough, therefore we need to bring the ‘bigs’ together and create dialogue among them, and fast,” he explained to attendees.

The objectives? Bring concrete solutions to politicians that will facilitate dialogue among the NGOs, often too concentrated on single issues, and create a team of “heroic chief executive officers” who are ready to lead the transformation of our style of production and consumption and to assume personal risk to seek the higher goal of preserving our planet’s destiny.

“The question to ask them, whether they are heads of state or corporations,” he added, “is one and one only: ‘do you really want to fight global warming?’ We must insist on an answer, even negative, and make it public because if one of them didn’t care about committing the greatest crime in the history of humanity, electors and consumers should know it. What do we do with them at that point? We ignore them. We can’t take our eyes off the objective or waste more precious time.”

During the event, Franklin master's students participated in a Q&A with Polman, asking questions about his concept of leadership and receiving career advice from him.

The ex-CEO of Unilever shared the stage with his wife, Kim Polman, who co-authored “Imaginal Cells: Visions of Transformation” with Al Gore and Mohammad Yunus, and who co-founded “Reboot the Future;” Gilbert Ghostine, CEO of the Swiss corporation Firmenich, one of the top businesses for development of technology for social objectives in conjunction with the Bill & Melinda Gates Foundation; Pio Wennubst of SDC; members of the Global Compact of the United Nations and of the UN Institute for Training and Research (UNITAR), Global Development and Impact Hub Zürich; and Jenny Assi from the Scuola universitaria professionale della Svizzera italiana (SUPSI).

See our photo album of the event on Facebook

Learn more with some media coverage in Italian: