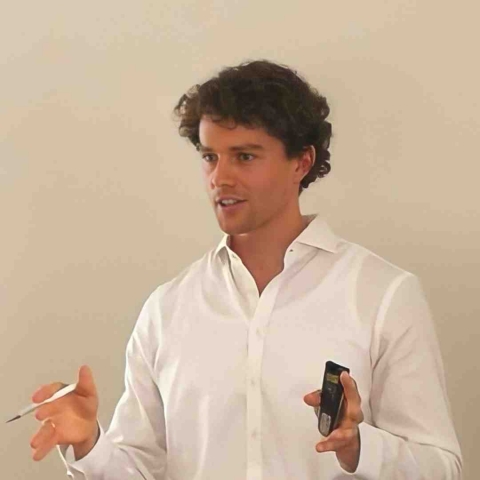 On April 8, 2022, Professor Andrea Terzi invited Dr. Richard Senner, Senior Economist in the Financial Stability Division of the Swiss National Bank, to speak again to Franklin students in a webinar, sponsored by the Master of Arts in Political Economy of Money and Development and Business and Economics Division.

Dr. Senner also offered a webinar last year on Swiss banks and the measures implemented in the midst of the Covid-19 crisis. This time, he shared his knowledge on the nature and the consequences of "shadow banks", or non-bank financial intermediaries, accounting now for about half of total global financial assets. While these entities, which include money market funds and finance companies, may offer a valuable alternative to bank lending, they may also become a source of systemic instability, hence demanding appropriate policy responses.

Following the webinar, we had an opportunity to speak to Dr. Senner.

Franklin: how do you define “shadow banks”?

Dr. Senner: Originally, starting in 2007, the term “shadow banks” emerged to describe borrowing and lending outside the regulated banking system. Today, the term has officially been replaced by the less judgmental “non-bank financial intermediation” (NBFI). The Financial Stability Board (FSB), an international body that monitors and makes recommendations about the global financial system, defines the NBFI sector as a broad measure of all non-bank financial entities, composed of all financial institutions that are not central banks, banks, or public financial institutions. Pension funds, investment funds or insurers are well-known examples of the NBFI sector.

Franklin: Why do they matter for financial stability?

Dr. Senner: NBFI assets increased over the last 20 years globally. Today, the NBFI sector accounts for about half of total global financial assets, although there is of course great heterogeneity between countries. Just because they are big doesn't necessarily make them risky. Why have they increasingly been in the headlines in recent years? Because they can be, and have been, a source of financial instability. In March 2020 and in previous episodes of similar market turmoil, the NBFI sector amplified stress through inherent structural vulnerabilities, notably liquidity mismatches and hidden leverage. With system-wide stability under threat, massive central bank support was used to restore the calm. For Augustin Carstens, head of the Bank for International Settlements (BIS), such repeated occurrences suggest that the status quo is unacceptable. In his view, fundamental adjustments to the regulatory framework for NBFIs are called for, to make it fully fit for their purpose.

Franklin: What would you suggest to make the NBFI sector more resilient?

Dr. Senner: FSB is currently conducting various analyses to better understand which markets and actors have contributed to amplifying shocks in the past. These include issues related to insufficient liquidity or excessive leverage, which often arise through interconnectedness with banks. Once these risks are better understood, policies will be assessed to address systemic risks. Overall, however, our understanding and economic research on NBFIs is less developed, for example, compared to our understanding of the banking system, which in turn makes it an exciting area of research.

Disclaimer: The views expressed in this interview are those of the author and do not necessarily reflect those of the Swiss National Bank.