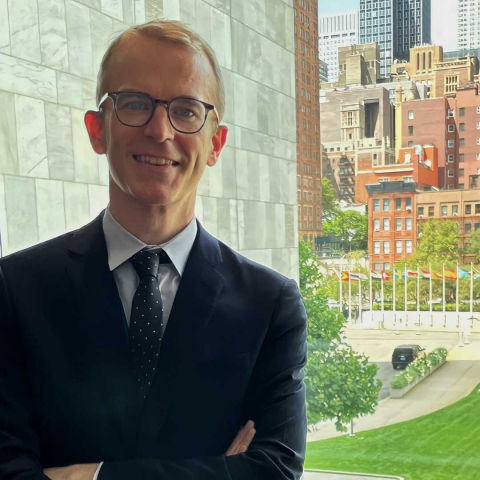 Professor Fintan Hoey recently participated in the Tenth Review Conference of the Treaty on the Non-Proliferation of Nuclear Weapons (NPT) at the United Nations in New York. Along with other members of a global research consortium on the Constitutional History of the NPT, he presented preliminary findings to an audience of delegates, civil society representatives and NGO professionals.

Professor Hoey presented his research on Japan’s approach to the treaty in the 1960s and 1970s. Despite being the only country to have been attacked with nuclear weapons, Japan was not an automatic supporter of the treaty. It feared the permanent loss of status associated with the denial of a nuclear weapons option. It also feared that access to the peaceful applications of nuclear physics, most notably in the field of energy production, would not be available if Japan were to adhere to the treaty. Ultimately, these fears were largely assuaged, and Japan signed and ratified the treaty (1970; 1976).

The research consortium on the Constitutional History of the NPT, which has been generously funded by the Carnegie Corporation of New York, is writing a new history of the formation of the NPT from multiple perspectives. Led by Dr. Jonathan Hunt of the Air War College and Prof. Kendrick Oliver of Southampton University, it brings together 21 historians and political scientists from all five continents to analyze the perspectives and experiences of 18 countries and one international organization, the International Atomic Energy Agency. The consortium aims to make a significant intervention into the scholarship on the foundation of the NPT regime. In addition, it is hoped that this enriched common understanding will be relevant and useful for today’s policymakers, NGOs, and other stakeholders in the global non-proliferation and disarmament community.

This is a particularly critical time for the NPT as it faces multiple pressures. Non-nuclear weapons states, frustrated by the lack of movement on disarmament, concluded a new Treaty on the Prohibition of Nuclear Weapons which came into force in 2021. Meanwhile, nuclear weapons states are improving and upgrading their nuclear forces while the ongoing war in Ukraine has led to the most serious nuclear saber-rattling in decades. It is therefore vital that policy-makers and wider publics understand the origins and meaning of the NPT which, for all its shortcomings, has become an entrenched norm in the international system over the last half-century.