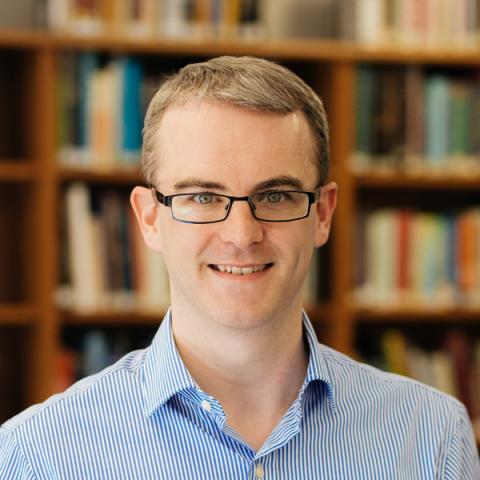 Fintan Hoey is a historian of modern Japan and of U.S.-Japanese relations, with research interests in nuclear proliferation, the Cold War in Asia and American diplomatic history.

His research monograph, Satō, America and the Cold War on U.S.-Japanese diplomatic and security relations during the tenure of Satō Eisaku, Prime Minister of Japan, 1964-1972, was published in 2015. This draws on recently released material from the Japanese Foreign Ministry Archive as well as US archival material and Satō’s diary. The book, the first major study in English, argues that Satō’s foreign policy was not motivated by a slavish adherence to Washington but from a realist appraisal of Japan’s security imperatives.

More recently his research has focused on nuclear proliferation, particularly Japan’s role in the emergence of the Nuclear Non-Proliferation Treaty (NPT) and its attempts to secure full freedom of action in its pursuit of nuclear power technology. He is a member of several global research collaborations including, the Nuclear Proliferation International History Project, the Nuclear Diplomacies collaboration of diplomatic historians and historians of science, and the Constitutional History of the NPT, a project funded by the Carnegie Corporation of New York which will provide expert briefings to the Treaty’s Review Conference.

In addition to teaching courses related to his research interests, his wider teaching interests include modern France, modern Ireland and the British empire. He is the co-founder and director of the Minor in Postcolonial Studies.

‘Non-Nuclear Japan? Satō, the NPT, and the US Nuclear Umbrella.’ In Negotiating the Nuclear Non-Proliferation Treaty: Origns of the nuclear order.Edited by Liviu Horovitz, Roland Popp, and Andreas Wenger. London: Routledge, 2017.

H-Diplo Article Review 1003 on Kitamura. “Runaway Orientalism: MGM’s Teahouse and U.S.-Japanese Relations in the 1950s” and on Nishikawa. “The Origin of the U.S-Japan Dispute over the Whaling Moratorium.” November 2020. https://hdiplo.org/to/AR1003.

‘Review by Fintan Hoey,’ H-Diplo Roundtable XXI-23 on How to Reach Japan by Subway: America’s Fascination with Japanese Culture, 1945-1965 and on Consuming Japan: Popular Culture and the Globalizing of 1980s America, 13 January 2020, https://hdiplo.org/to/RT21-23.