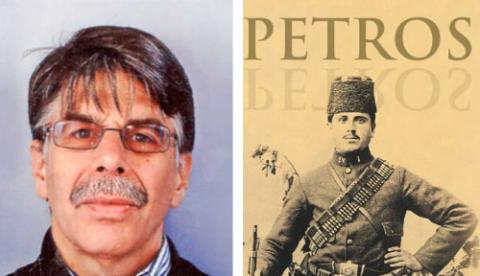 FUS Professor Emeritus Robert H. McCormick Jr.’s most recent novel, Petros, is now available. It is the story of a courageous young Greek patriot, a hero of every-day life, who does what he must to provide for his family and friends. Though set in the past, it’s a tale to which we can all relate.

Petros is roughly based on the life of the Professor’s maternal grandfather. Drawing on first-hand historical accounts, it gives us an honest and realistic sense of life at that time. The book is divided into two parts. It begins with an act of defiance, demonstrating the newfound sense of freedom that the Balkan people felt as the Ottoman Empire collapsed around them. Petros himself is caught up in the territorial conflicts generated by that wave of nationalism and becomes conscripted to fight. However, in part two, we see Petros fleeing from an unstable political climate to save himself and his family. We travel with them as they pass through immigration at Ellis Island and establish a new life in the United States. Through Petros’ eyes, we experience the Great Depression and other events.

During his 23 years at FUS, Professor McCormick taught Literature and Creative Writing courses, directed Academic Travels across four continents, served as a Faculty Advisor to The Literary Society and student mentor, and has won numerous awards. In addition, he organized five editions of the Caribbean Unbound conference that explored the history, politics, art, literature, religion, film, and music of the Caribbean and brought scholars and literary figures to the Franklin campus.

Professor McCormick retired from Franklin University Switzerland in 2011 but remains active in the literary world. Does he have any advice for aspiring authors? “Patience, patience, and more patience. Believe in yourself! Never stop searching for the right word or phrase!”

Petros is available in Italian via the local publishing company, Fontana Print. It will also be sold at Libreria il Segnalibro in downtown Lugano.