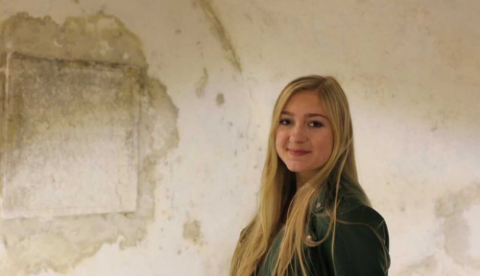 Today, Rylee Manning lives in Dublin. She attends Trinity College Dublin, where she is pursuing a postgraduate degree in linguistics. Rylee graduated from Franklin University Switzerland in May 2020 with a combined major in French and Comparative Literary and Cultural Studies (CLCS).

When I spoke to Rylee, she said she had not yet received notice of her acceptance into Trinity College before graduating. On May 17, 2020, she did not know what the future had in store for her. "I got home the day before we graduated virtually. It was wild. I flew home from Switzerland in the middle of the pandemic, graduated online that afternoon, and then found out that I got into Trinity's Master's program less than 48 hours later. In the span of a week, my whole mindset changed."

At Trinity College, Rylee studies linguistics, defined as the study of language. At Franklin, Rylee developed her interest in linguistics through her study of French, Italian, and English literature. She spoke fondly of her course on multi-linguistics. Rylee defined multi-linguistics as "a certain capacity to read or speak or write in another language."

While some linguists define multilingualism as complete fluency in another language, Rylee takes a more radical approach. "I don't consider myself a monolingual having studied French and Italian for so long, but I also wouldn't consider myself entirely fluent in either of those languages. I'm somewhere in the middle, which is why I like to adopt a more radical perspective of multilingualism."

Rylee started working on her master’s dissertation earlier this year. In preparation for her dissertation, Rylee explored the connection between multilingualism and the delayed onset of degenerative cognitive disease, such as dementia. Through her research, Rylee has found that the onset of degenerative cognitive disease begins later in individuals who are proficient in more than one language.

Despite Rylee's love for linguistics, she has not been unaffected by the pandemic. After Rylee arrived in Dublin in September 2020, Ireland soon imposed several restrictions that limited social gatherings. She has not stepped foot inside a classroom and relayed that it has been challenging to connect with other students. Despite these challenges, Rylee is happy to be studying a subject she cares about: "I think it helps that I'm studying something I'm really passionate about, but I feel like every other student in the world. It feels like something is kind of missing."

Rylee does not have a set plan for the future she will create, but she has multiple ideas and will potentially pursue more schooling. Before we wrapped up our conversation, Rylee commented on the impact that Franklin had on her. As a student in the CLCS department, Rylee has to write a thesis during her last year. She stated that "Writing a thesis at Franklin was one of the most rewarding things I ever did for my education. Now in preparing to write my master’s dissertation, I have a level of confidence I wouldn't otherwise possess."