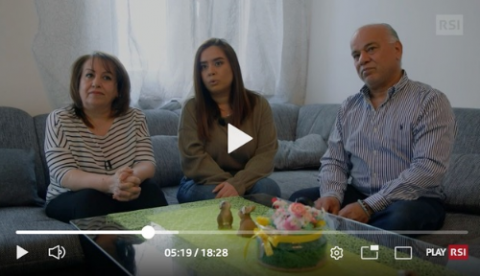 Franklin’s first graduate from the Scholarships Without Borders program.

Lor Kirfarkis ’20 is an amiable and bright Franklin alumna. She recently graduated from Franklin with a combined major in Economics and Management, and a Minor in Art History. She is just like every other young Franklin graduate, except for her extraordinary story: Lor and her family are Syrian refugees.

Now entering the 11th year of conflict, Syria has been torn apart by the civil war which has killed hundreds of thousands of people since its start in March 15, 2011. The Syrian landscape, once a peaceful region, is now ravaged by rubble, death and destruction. When the nation was inevitably collapsing in 2013, Lor’s family was forced to promptly flee, leaving loved ones, their home and all that was dear to them behind. The Kirfarkis family was welcomed in Ticino, heartbroken inside, but with great gratitude for the chance to start a new life, away from conflict and uncertainties.

“When I came from Syria, I was hopeless. All I wanted was the opportunity to work or study to go on with a new life here in Switzerland.” Lor had only completed one year of English Literature undergraduate studies in Syria when she realized her life was at stake. Luckily, the Ticino region promoted a project to recognize and support Syrian refugees, with the challenge of reintegrating them into a normal lifestyle, assisting with housing, Italian classes and future plans.

Franklin University Switzerland was Lor’s big break, thanks to the Scholarships Without Borders (SWB) support program, particularly apt for students in difficulty who need to be supported not only academically but personally. She chose Franklin especially for the chance to improve her English skills and was encouraged by her family to not give up on her academic ambitions. “I knew a little bit of English, but when I got to Franklin I realized it wasn’t enough and was almost about to give up. Thankfully, Professors Fassl and Wiedmer stood by my side and pushed me to pursue my degree”. The initial struggle and lack of confidence soon turned into determination and enthusiasm – “Franklin saved my life. Being accepted was the best thing that happened to me.”

Lor recalls great memories from her four years at Franklin, the small and intimate classes, the people and friends she made, and, her favorite, the Academic Travels. Currently, Lor is searching for a job in the Lugano area, possibly in the banking sector, to put into practice her learnings and abilities, and hopefully to also finally obtain a Swiss permanent resident permit (C permit).

“You don’t know what you have until you lose it. When in Syria I didn’t care about studying or excelling academically, but when I moved to Switzerland I was incredibly thankful for the opportunity to continue in my studies. Remember to never give up and continue encouraging yourself to go forward.”

Discover the Kirfarkis family’s interview on the Radiotelevisione Svizzera here.