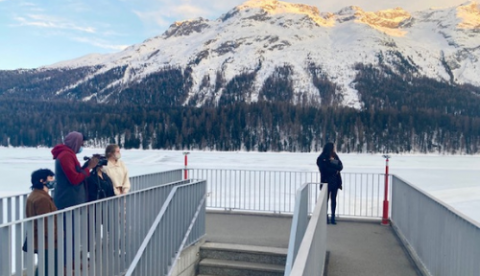 Not all classes have final exams. Faculty teaching in the Division of Arts and Cultures sometimes prefer to evaluate experiential learning outcomes through prompts that challenge students to engage creatively as production teams. For example, in preparation for finals week this Spring, a Comparative Literary and Cultural Studies class taught by Professor Fabio Ferrari was asked to address the following challenge: imagine a contemporary dystopia and create a story about the challenges faced by a young protagonist. What does that dystopia look like, sound or feel like? Does your protagonist rebel or escape, sabotage the system or fall under its control? What message does your film ideally convey?

On Monday, May 10, students will be premiering four short Sci Fi films in the Nielsen Auditorium. Due to current restrictions, the screening is by invitation only but links to all movies, including one film created in association with the Honors Program, will be shared soon. Filmed on location in Saint Moritz and produced for Professor Ferrari’s Science Fiction and Film course, the shorts emerged out of animated, hybrid class discussions which often explored connections between COVID-19, current events, and Sci Fi literature and film.

The short films are linked together in some ways through various fantasies of dystopian breakdown. The screenplays emerged as a collaborative process and key stages of preproduction, production, and postproduction have benefited from the expert coaching of Tatiana Ivensen, Ecolé Internationale de Création Audiovisuelle et de Realisation graduate and Franklin alumna.

The titles of the films are “The Known Secret”, a COVID-19-era conspiracy thriller, “The Diary of Nothing”, a poetic inquiry into the ethics of genetic engineering, and “Who Am I”, a Sci Fi comedy with a Dickensian twist.

The fourth film, “Paradise Paradox”, explores escapist fantasies and frustrations reminiscent of the current COVID-19 pandemic through ancient storytelling and modern technology, taking inspiration from the Greek myth of Icarus and his flight too close to the sun.

“Trapped in a simulation created by her father constructed of computer code, Icaraa realizes that now is her only chance to escape as the minotaurs that guard her begin to freeze in place. The protagonist needs to find a way out of this world to save herself and her father, who seeks to guide her back to safety. With a computer and her knowledge of coding, Icaraa is able to create an alpine gondola that finally will usher her to freedom. But, despite Icaraa’s technical skill, will fear and impatience ultimately get the best of her?”

A fifth short film, “Don't Trust Tarkovsky”, influenced by the Soviet Russian filmmaker, theatre director and writer, is an honors option project about an eco-uprising that infiltrates the dynamics of a group of college-aged friends. The film explores the relationship between youth, science and the natural world.