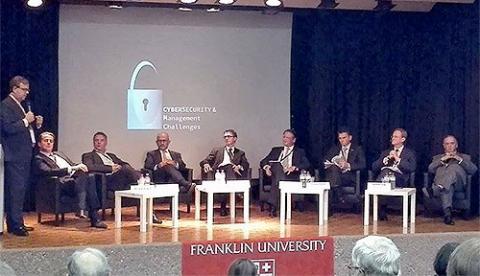 Virtual threats are constantly on the increase and can have serious negative effects in many areas of human activity. Anything that is connected to the web can be manipulated by hackers. Hackers are becoming ever more numerous, and can break into even the most advanced protection systems, opening them to manipulation. It is estimated that in a few years’ time, over 50 billion devices active in different sectors could be the object of manipulations.

Roundtable with participants from industry, government and the IT sector.

FUS students discussing with Dr. Liam Fox during a break.

These and other dangers connected to the Internet, and possible ways to address them, were at the center of an international symposium recently hosted by at Franklin University Switzerland, entitled "Cybersecurity and Managerial Challenges".

The symposium, which took place on September 30 and October 1 in the University’s Nielsen Auditorium, was graced by the presence of a number of renowned international speakers, including Jack Caravelli, formerly an advisor on nuclear safety to US Presidents Clinton and Bush Jr.; The Hon. Dr. Liam Fox MP, former Secretary of Defense of the UK government, and Paolo Sartori, of Interpol Eastern Europe – together with several other experts and CEOs from key Swiss and international companies.

The two-day event was organized by Franklin Trustee Kim Hildebrant in collaboration with FUS Professor Morris Mottale, and was sponsored by KNC Consulting Switzerland, the City of Lugano and a number of private sponsors, including FUS Trustees Angela Fowler and Pat Tone, respectively Vice Chair and Chair of the Franklin University Switzerland’s Board of Trustees.

“With its curricular strengths in management and international relations, Franklin is the perfect place to initiate a series of conferences that connect technology with security, that situate those issues within the context of management, and that adopt an international approach to the issues in question.”

“I am pleased that we were able to coordinate this event with KNG Consulting, with our Alumnus, Trustee, and great friend of this university, Kim Hildebrant.”

“This is an auspicious collaboration for Franklin University Switzerland, as we grow as a university and seek to reach beyond the boundaries of the ivory tower, to connect to our community here in Ticino, and to engage issues, deeply embedded in the social and political contexts of our present age, going beyond the confines of mere geography.”

As part of the program, participants in the symposium also had the opportunity to witness the live simulation of a cyber-attack, courtesy of the Compass Security Group.

After Lugano, the Cyber Security Symposium will be presented also in London, Brussels, Tallinn, Vienna, Frankfurt, Copenhagen and the United Arab Emirates.