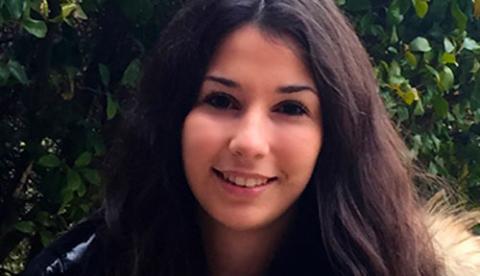 Last summer, when FUS student Karla Tadic '16 heard that Kolinda Grabar-Kitarovic, former Assistant Secretary General of NATO for Public Diplomacy, would be running for President of Croatia in the December election, she knew she had to get involved. The result: a campaign job as the assistant to Mrs. Grabar-Kitarovic's personal secretary, as part of which Karla accompanied the presidential candidate on her campaign bus tour, and saw her become Croatia's first female President.

President Grabar-Kitarovic talking to the press during the campaign. On the left, Karla Tadic ‘16

It was Karla's dedication to and preoccupation with the political standings of her country that allowed her to obtain the work experience opportunity of a lifetime. "President Grabar-Kitarovic wanted young, ambitious, and hardworking people in her campaign. So, with the recommendation of some people close to her who knew my motivation, international experience and knowledge of foreign affairs and languages, I was honored with the opportunity to spend my winter break working for one month with her and her team."

During this unique experience, Karla aided and participated in the campaign tours, but also worked in the campaign headquarters, helping with the organization and administration of President Grabar-Kitarovic's campaign.

Though Karla only worked with the campaign team for a few weeks, she was able to take what she had learned at Franklin as an International Economics major with an emphasis in political economy and a minor in political science, and apply it to what she was experiencing and seeing during her time with the campaign team. "My politics and economics classes have provided me with a very good insight of what to expect and of the crucial issues in today's world that require our attention," Karla explained. "During the campaign there was a lot of discussion regarding possible reforms necessary to stabilize Croatia's economy, some of which we had covered in an economics class: Issues and Controversies of Macroeconomics.” Because of her position as a NATO official, much of Grabar-Kitarovic’s campaign also focused on stressing the importance of national security and on the war against terrorism, topics that Karla said were covered in almost every politics class she has had at Franklin so far.

"I can only describe it as an unforgettable experience that I will cherish for the rest of my life," explained Karla. "One of the best parts was that I got to know our new President very closely, especially who she is as a person, which made me realize even more that she is the right person for the job."