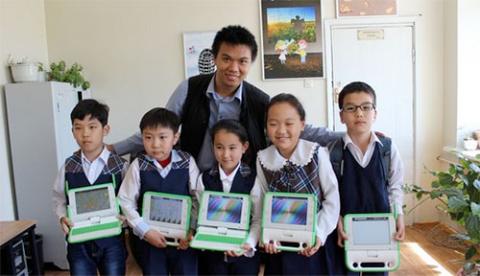 John Auxillos says he "seem[s] to have this pattern of preferring unique and different experiences," which was exactly what Franklin gave him. He sought a small school in an unusual location and was drawn to Franklin's Academic Travel program. Franklin offered John a non-standard college experience and hence, “the entire Franklin experience was quite surreal even as [he looks] back today."

John with a group of 5th grade children and their their OLPC XO1 laptops in Ulaanbaatar, Mongolia

John fondly remembers "hanging out with friends from different countries around the world, sharing experiences, and traveling together," as well as his courses with Professors Parsons and Rocourt.  He credits Professor Parsons with "profoundly [changing his] view of the liberal arts." "Prior to attending Franklin," he says, "I was more inclined to the computer science/engineering domains, and I was less informed about the idea of liberal arts and humanities. History class was one of the things I was poor at, but that changed when Professor Parsons passionately gave his lectures. Something in attending his classes changed the way I viewed history and that also opened up how I look at other disciplines." Professor Rocourt helped John see things from different angles, and John valued his "eye-opening" life experiences.

John utilizes the global view, communication, and writing skills he gained at Franklin in his international development career and continued studies. John's particular focus lies in education and technology; he truly believes that "when technology is used appropriately (i.e. not as expensive notebooks or blackboards), it can help the next generation learn and build a sense of curiosity to tackle some of the world's problems." John's frustration with his elementary and high school curriculum sparked his curiosity to learn new things and his desire to "share this experience with others who did not have the opportunity [he had] by creating the learning environment with the use of technology.

John is currently a masters degree candidate in the field of International Development Engineering at the Tokyo Institute of Technology. He has worked on three major education development projects under his professor at the Yamaguchi-Takada Lab. Two projects involved in-service primary school teacher training with the appropriate use of information and communications technology (ICT) in Mongolia. John has spent a total of six months in the field as part of these projects, collaborating with local students, teachers, administrators, and education departments in an effort to appropriately address their needs in terms of technology use and education.

The other project involves regional education systems research about transversal competencies (otherwise known as 21st century skills, non-cognitive skills, and general skills) as an intern at the UNESCO Regional Bureau in Bangkok, Thailand. He is a member of the Education and Policy Reform Unit where they are attempting to build a framework for a "set of skills that go beyond the standard mathematics and grammar that the next generation needs to solve the world's pressing problems." Additionally, John is working on technology tools to increase effective communication and collaboration among education stakeholders.

John spends his free time outside of work and school with startup groups, mostly in Tokyo. "This is a group of people," he says, "who are passionate and optimistic about changing the world and the energy you get from them is quite addictive." He also tries to contribute to the Franklin community whenever he can, specifically by attending Alumni Council conference calls, volunteering as an alumni, parent, and prospective student ambassador, and organizing Asia-Pacific alumni gatherings. "Franklin has invested a lot in bringing a unique experience for students who are willing to pursue learning with the school," John says. It seems John has certainly used this unique educational experience as, in the words of Nelson Mandela, a "powerful weapon...to change the world."