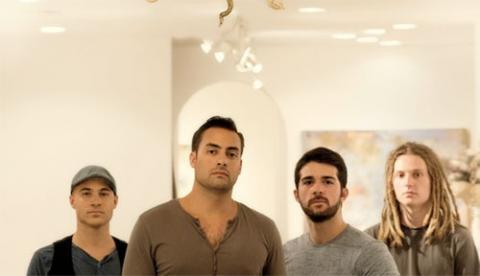 The name of Jarett Gilbert’s, ’07, band, Bury Me A Lion derived in part from an academic travel experience at Franklin. While travelling to Ireland with Professor Matthews in spring 2004, he “was exposed to a lot of great music, including the Pogues. A line from their song, “If I Should Fall From Grace With God,” particularly resonated with Jarett; from this line, coupled with lion imagery from a previous band name attempt, Bury Me A Lion was born.

Jarett and Sam, the band's guitarist, met during Jarett’s post-graduate studies at New York University. Jarett says he was “creatively inspired in NYC” and, after recording some solo songs, sought more musical opportunities. Sam and Jarett “clicked musically from the get-go” and, soon after their introduction, they began writing their first track together, “One Arm For Another.”

Subsequent songwriting followed a “very organic process,” generally beginning with “a few guitar riffs” from Sam. Jarett emphasizes the importance of authentic emotion in the vocal melodies from which he composes these riffs. Then, “once I have a melody,” he says, “I try to verbalize that emotion into lyrics.” Sam and Jarett meet to discuss the path a track should take before bringing it to the band for the finishing touches.

Over time, as the band has become more comfortable with their creative process and goals, Bury Me A Lion’s sound has evolved. Jarett admits that their sound started out as a fusion of both of their influences-for Sam, bands like the Strokes, and for Jarett, Morrissey and the Smiths. “As with all group musicians, you come to develop a sound unique to your own relationship, and you shed those more blatant influences for something genuine and original.” He now describes their genre as “alternative…with modern rock and pop elements,” and mentions that the band members' influences have diversified, ranging from funk to metal.

While such influences “many not always show in Bury Me A Lion,” music from all over the world inspires Jarett. “I really expanded my musical horizons during my four years at Franklin, consuming basically any genre or cultural style of music I could get my hands on. Many of my favorite musicians are from Greece, Turkey, the Middle East and Latin America.” At Franklin, Jarett also “started developing an artistic voice,” writing songs, swapping music with friends, and jamming on the lawn.

For Jarett, the best part about performing is the connection with the audience. “For that 45 minutes minutes, you’re the leader of the party, in charge of making sure everyone has a good time. As long as people are smiling, dancing or singing, it’s worth it. And, lest we forget, music is cathartic for musicians, too. Being able to use the stage and your art as an outlet is the perfect release.” It was on a car trip in New Hampshire with his dad and brothers that Jarett himself first experienced such a "musical moment" and he has been passionate about playing music ever since.

When asked about his best memories with the band, Jarett fondly recountss one particularly memorable show in his hometown in Georgia. Apart from that, he says, “each benchmark we hit is special to us- writing a new track, playing a good show, receiving a nice review, selling a t-shirt, being asked to open for a touring band, booking a well-known venue. You learn to cherish everything because you built everything.”