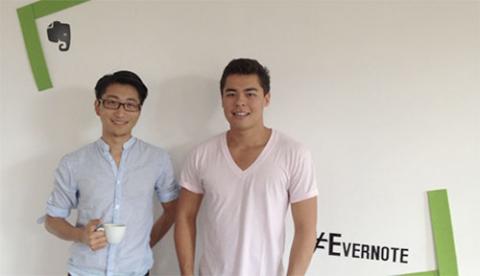 Both Chris Herms and Greg Wén, '12, sought an international college experience. Chris had grown up studying at international schools, both in Hong Kong and Zurich, and wanted to continue living in Switzerland in such an environment. Greg also knew early in his high school career that he wanted to spend time abroad and saw Switzerland as the perfect setting in which to pursue an international degree because of its nature as a "cultural junction."

The two alumni are continuing their residence in Switzerland as employees of Evernote, where Greg is an international marketing coordinator, and Chris is a product genius, or as they call his position in the U.S., a business specialist. Evernote is an application with more than 70 million users worldwide and three editions: Free, Premium, and Business. Its main purpose is to help users remember and organize various elements of their lives, synchronizing documents, images, and everything in between across multiple electronic devices.

Chris works specifically with the Evernote Business version, developed in 2012, as the only sales representative in the Europe, Middle East and Africa region. He works with businesses in this region to "increase the amount of users with [Evernote's] Business account" and to "manage the account[s] and work on optimizing... usage of the product." He is also involved in events all over the world, from San Francisco to Singapore.

Greg's role at the company is dynamic and varied.  He does "everything from drafting contracts, to scheduling interviews for the CEO, to planning food events in Mexico." Right now, he is managing "international e-mail marketing efforts in Europe and Asia and oversee[s] localization of...marketing material for regional markets."

Greg and Chris love the "international flavor" of their work and the opportunity to "have a lot of contact with people both in- and outside of [the] organization." For Greg, a highlight is working with PR agencies all over the world. Chris enjoys the opportunity "to travel on behalf of the company as well as a see a direct correlation of [his] activities and ideas and how they affect [the] company's development in the region."

The International Management major prepared Chris and Greg well for their careers at Evernote.  Greg praises the "well-balanced" nature of the program, as well as the "wide selection of non-management courses that allow you to explore other topics you might be interested in, such as communications or religion." Chris also says that "all the courses I took in some way or another helped me for my current position." "For example, early classes such as Public Speaking or Intro to Com were great resources to prepare me for such an internationally active sales position," he says. "The Business curriculum was great to give me a global, business-oriented perspective on Evernote and its operations."

The two also credit Franklin's career services program in part for their current success. For Greg, this program helped him land an internship at the Universitá della Svizzera Italiana's Executive Master of Science in Communications program, from which he gained the connection that "led [him] to [his] current job at Evernote." Chris found his experience taking the Franklin's career development course helpful in his job search. He specifically heard of the opportunity with Evernote through the Franklin Alumni group on LinkedIn and encourages current students and recent graduates to take advantage of this invaluable tool, as well as the new alumni app. Both also mention these platforms as effective ways to stay connected with the Franklin community.

Greg looks forward to Franklin's expansion and continued growth in global recognition, potentially through more partnership programs. Chris is excited about its new "'University' status" and hopes for "Franklin to get that international recognition that it deserves for being such a unique school." With alumni like Chris and Greg doing such exciting things, Franklin no doubt will receive just that.