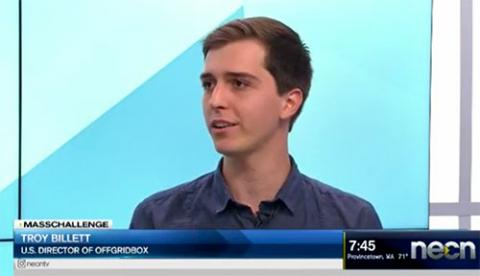 Class of 2016 Alumnus Troy Billett’s passion for entrepreneurship was evident when he started his first company at age 17 in film production. Then, while at Franklin, he started his second company which helped small startups build teams and outsource software development. After graduating with a bachelor’s degree in International Management, he was hired as a consultant for Techstars, where he again helped startup companies develop and scale their businesses. Now Troy works for OffGridBox – a modular and compact unit that provides renewable energy and clean water in remote areas and developing countries.

Looking back on his time at Franklin, Troy remarked, “I had less than a modest understanding of my future when I started at FUS. During my first semester, I found myself in culture shock, overwhelmed by the changes and new surroundings I was thrust into. It was only after I returned to my comfort zone back home that my entire perspective changed, transforming my personal and academic life.” Thanks to his resilience and the support from the FUS community, he finished his studies at Franklin and used his experiences to land an international job. “This work took me across the globe. Through the international network I was exposed to during my studies, I learned how to build compelling international teams of entrepreneurs whom I met through the FUS network.”

Troy now works as Director for OffGridBox, building out the headquarters in Boston and leading global sales. The company builds and delivers modular and compact units that provide renewable energy and clean water in remote areas and developing countries. “Starting with 3 people in only a year,” Troy noted, “we have already raised $1.6m in funding, and grew our team to 15 people with offices in Boston, Italy, and Rwanda.“In Rwanda, where women and children usually spend hours to collect water, they end up filling their jerry cans with contaminated water that could cause water-borne diseases. We are helping them redirect that energy and time towards education, empowerment, improved sanitation and health.”

Like many Franklin Alumni, Troy’s Franklin experience in an international environment helped him get out of his comfort zone and gave him what he needed to succeed in an international organization. As he remarked, “Being exposed to diverse communities forced me to take a step back constantly and truly understand my surroundings and what was possible with the resources at hand. This is what brought me to where I am today.”