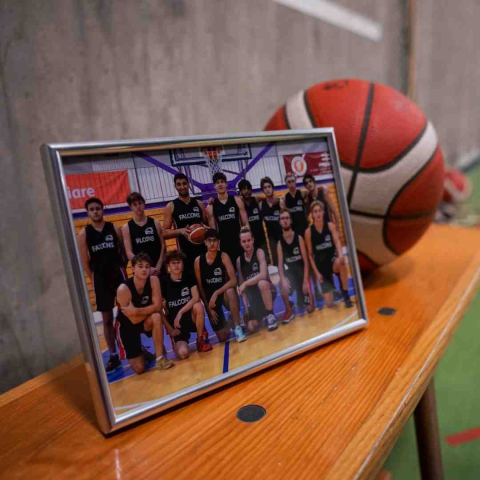 The original founding of the Franklin Falcons basketball team dates back all the way to June 2004, when our institution was still known as Franklin College. This was followed in 2005 by the founding of the Lady Falcons team, also coached by Franklin’s current Vice President for Academic Affairs, Dr. Andrew Starcher. Straight off the bat – or should we say the basket! – the Franklin teams started competing and taking their first-ever timid steps in the Ticino regional championships coordinated by Ticinobasket. Fast forward to 17 years later, and the Franklin Falcons became the proud 2021 winners of one of the most important tournaments in the region, the 2021 Coppa Ticino.

But what happened between 2004 and 2022? Let’s discover the highlights of the Franklin Falcons' story.

Students were instrumental in the founding and successes of both the original men’s and women’s teams, with players from the US, Greece, Germany, Jordan, Saudi Arabia, Lebanon, Hong Kong, Japan, Russia, and Slovenia, among other countries. A memorable foray for both teams was participation in the 2006 international tournament in Lloret de Mar, near Barcelona, Spain.

After a few years of ups and downs, the original Franklin Falcons basketball teams were sadly and officially disbanded in 2007, due to the rising costs of membership in the Swiss League combined with the continuous challenges of remaining competitive leagues, which had rendered the team impractical to maintain. A decade goes by without the Franklin basketball team uplifting the hype on the Franklin campus, until 2018, when Aniello de Lucia, Coordinator of Recreational Sports, joins the department of Office of Student Life – learn more here.

During that same academic year, Aniello discovers that there are students at Franklin that demonstrate a particular interest in recreating a basketball team, particularly Jonathan Bystrowski '23 and Faisal Dakkak ’23. Soon, the trio manages to arrange partnerships with other local teams, engaging in basketball practices and friendly matches.

During the Fall’19 semester, a growing interest and exhilaration in the small, amateur basketball team kept growing among Franklin students. Jonathan and Faisal become the spearheads of this enthusiasm and manage to coalesce several other classmates into creating a devoted community around the new sensation. Thus, the Franklin Falcons 2.0 team resurfaced again, with a brand new logo and its own Instagram page, managed by the players directly.

The Falcons 2.0 played their first matches in small and friendly tournaments with opposing teams from other Ticino institutions. Jonathan and Faisal are soon promoted to captains of the team and Aniello follows closely behind, managing all administrative and organizational aspects, while coordinating the launch of two regional tournaments with other stakeholders.

“Already starting from these first baby steps we saw great potential, to the point that on both occasions we reached the finals. While the talent on the roster was evident, as far as I am concerned, the best thing was the incredible involvement, engagement, and energy from the entire FUS community in supporting the team,” comments Aniello.

However, at the height of their game in 2020, the Franklin Falcons came to an abrupt halt, as the COVID-19 pandemic put the world on hold for almost a year. The frustration was tangible, as the Falcons could not compete or even practice throughout the full Spring ’20 semester, until September of that same year, when Franklin was allowed to reopen the gym for training.

Returning to battle in friendly matches would have to wait till the Fall’21 semester when the Franklin Falcons 2.0 team sharpened their claws and swung back into action. Due to logistic, administrative, calendar, and economical difficulties, the Falcons were unable to officially enroll in the Ticino Basketball Federation. Nevertheless, they landed the opportunity of registering for the Coppa Ticino championship, in the over 18 y.o. category.

Finally, after 14 years, it is with great pride and satisfaction that the Franklin Falcons 2.0 can officially represent Franklin University Switzerland again in an official competition widely recognized in the Tessin region.

“We were so excited when the Coppa Ticino match schedule was finalized. We organized bus transportation for every game to allow all the Franklin community to take part in this incredible moment in the Falcons’ history,” continues Aniello.

From November to December 2021 the Falcons faced a total of 8 opponents and powerful teams, including the Lugano Tigers, the Viganello Caimans, and SAV Vacallo Basket. Game after game, they made their way through the quarterfinals and semifinals, channeling every match in their favor and reaching the final match, against BC79 Arbedo, on December 7, 2021.

“It was right in the middle of the semester’s final exams, but despite this less-than-optimal timing, many from the Franklin family came to the game to support the Falcons, including faculty and staff! With every score, the crowd exploded, but because of the tension, we closed the first quarter at a disadvantage of 7 points. We didn’t despair, and during the second quarter, the team refocused and recovered quickly, leading the game with + 9 points! The game ended with a score of 59 – 48 in favor of the Falcons! An incredible performance, especially from captains Jonathan and Faisal with 12 and 18 points each respectively. The Falcons did it, they became the winners of the 2021 Coppa Ticino!”

Aniello concludes “It fills me with joy to have been able to give my contribution in allowing the Falcons to live such an emotional experience. Just a few months prior, the mere idea of being able to play any official matches was inconceivable, let alone being able to win what still represents the highest competition we have ever participated in. It is also the first official trophy in the history of the Franklin Falcons.”

The Franklin Falcons are back for more excitement during this Fall ’22 semester, competing in this year's edition of the Coppa Ticino. Don't miss their next game tonight in the Tone Athletic Center at 9:30 p.m. Additionally, if you would like to join them during basket practices or become part of the official team, contact Aniello De Lucia.

What more is left to say than “Go Falcons!”