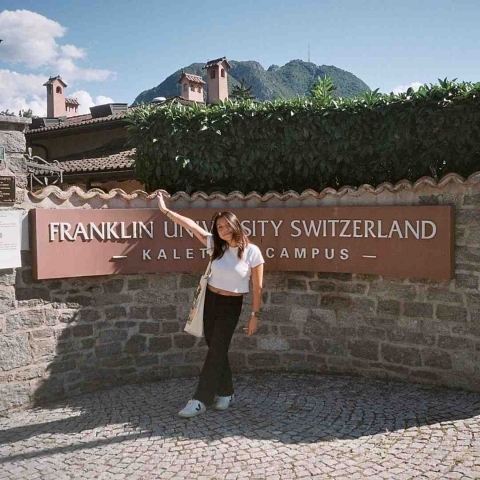 Jade Lum '22, a recent graduate at Franklin who earned a Bachelor of Arts degree in International Management with an emphasis in marketing, had the opportunity to take on a short curricular internship at a Tessin-based company, La Passione cc.

From Honolulu, Hawaii, Jade was eager to discover and explore more than just the boundaries of her Hawaiian islands. At first, she was drawn to move to the United States mainland, specifically California, but then extended her reach further as she researched Study Abroad programs. That is when she landed on Franklin's Study Abroad programs and thought to herself "how about studying abroad for four full years?"

As she investigated more, also through videos on Franklin's Youtube channel, she was attracted by the University's international ambiance, the peculiarity of the academic programs, and the absolutely stunning location – not to mention how safe Switzerland felt, as it has now ranked high for many years in the lists of the most secure places in the world.

About her four years at Franklin, Jade comments "I learned so much, had so much fun, made many friends from around the world, and have grown to become a young and independent woman." As she approached her final semester at Franklin, Jade felt as if a real-world working experience would help her gain further insight into what she wanted to do after graduating. She thus took on a 3-week part-time internship in an Italian cycling apparel brand based in Lugano. During her time at La Passione cc, Jade applied many tools, notions and lessons she learned at Franklin. Specializing in marketing, Jade supported the La Passione cc team on competitor benchmarking, digital marketing tasks, channel performance examination, google analytics analysis, and even social media content creation, which she highlighted as her favorite.

"It was a good wake-up call. I really wanted to understand if specializing in marketing was the right choice for my future career. A classroom setting is a great start, especially at Franklin where I developed many soft skills, but job-specific skills can only be acquired through experience" states Jade.

Not only did Jade gain her first job-related skills, but she also developed an early understanding of the consumer industry, the way a digital company operates, some of the most common business and marketing practices used today, and an overall awareness of the work environment.

She concluded "I applied so many of the marketing and management foundations I learned at Franklin. Two of the courses I mostly enjoyed and found to be extremely helpful in this working experience have been 'Digital Marketing and Web Analytics' and 'Management Science', because they gave me both a creative and data-driven mindset, which I put into use at La Passione cc."