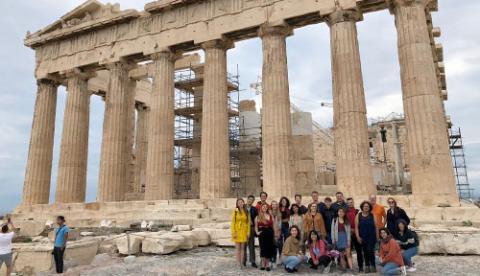 Simon Bruns ‘21, from Bad Zwischenahn, Germany, was selected to participate in the prestigious Athens Democracy Forum, a conference convened by The New York Times in Athens this past October, where international leaders and policymakers debated a wide range of issues affecting global political health.

The theme of this year’s forum – Reinventing Democracy: New Models for Our Challenging World – focused on the urgent need to assess the evolving state of democracy and its impact now, amid rapid global change. Influential individuals who were present at the Forum included Kyrias Mitsotakis, current Prime Minister of Greece, Donald Tusk, President of the European Council, Ory Okolloh, Managing Director at Luminate (Africa) and member of the Kofi Annan Commission on Elections and Democracy in the Digital Age, Paul Polman, Co-Founder and Chair of Imagine, Nathan Law, a Hong Kong politician and activist, and Stephen Bannon, former White House Chief Strategist. The event was hosted by New York Times columnist Roger Cohen.

As noted by Simon, it was the distinctiveness of the Franklin education that made him a standout candidate during the application process which he specifically focused on a Swiss perspective. He further went on to say “I am currently double majoring in History and Economics with an emphasis in Political Economy, with a minor in Political Science. I think that this major was an advantage in my application as it epitomizes the different and distinct possibilities that liberal arts has to offer to students.”

This year students were also given the opportunity to ask the first question at each panel. “I was lucky enough to be able to ask the first question at the ‘Talk with the Times’ Panel, a Q&A session with the moderators of the panels. We were also tasked with taking notes on workable solutions for the implementation of specific SDGs, which were then drafted into a white paper and sent to the organizers of the forum.”

In addition to the Forum, Simon was also one of the members of the Youth Democracy Forum (YDF) which took place a few days before and after the Athens Forum, organized by the Global Liberal Arts Alliance and the American College of Greece. “During this time we learned more about the UN’s Sustainable Development Goals, and we were able to have a discussion about these with Ms. Jayathma Wickramanayake, the United Nations Secretary-General's Envoy on Youth.”

Although the panels were one of the most rewarding aspects of such a special experience, Simon particularly enjoyed “the opportunity to meet like-minded people my age from all over the world, and we had excellent discussions during the whole week we were there. I learned a lot, most importantly that youth need to take a stronger role in the decision-making process and in how the world is shaped. I look forward to staying in contact with everyone to see what they are up to in the future.”