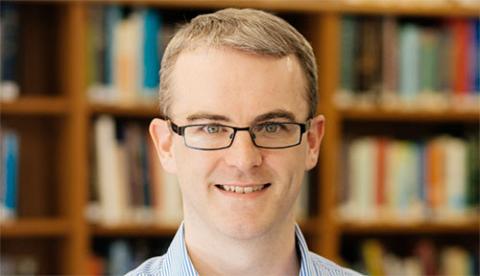 Professor Hoey, who teaches a wide array of classes in the History department, is an expert on U.S.-Japanese relations. “This book has its origins in work I began as a graduate student,” he explained. Hoey’s research on the subject was made possible also by a Japanese Studies Fellowship granted by the Japan Foundation, which enabled him to spend some time at Rikkyo University in Tokyo, where he was able to consult the resources he needed to further his research. “The timing for me was key since I was one of the first historians to make use of recently declassified material from Japanese government archives. The project developed into my doctoral dissertation at University College Dublin and from then into the book.”

Hoey’s new book will be a key part of the bibliography for his History of Modern Japan course, which will be offered for the first time next semester as an Academic Travel. Aside from this course, which will allow students to visit Japan and learn about the intricacies of its modern history in the field, Hoey teaches various other courses relating to the history of Japan, East Asia, the Cold War and the United States, including a first year seminar focusing on the bombing of Hiroshima and the history of nuclear weapons.

Japan’s complex and contradictory relationship with nuclear weapons is in fact a key area of interest in Professor Hoey’s research. It is the only country to have been attacked by nuclear weapons but “it is also closely allied to the United States, a major nuclear power.” Moreover its security situation and rising economic power made Japan an obvious candidate for developing its own nuclear arsenal in the 1960s. “Why Japan didn’t, and still doesn’t,” Professor Hoey explained, “is still a question that fascinates historians.”

Satō, America and the Cold War: U.S.-Japanese Relations, 1964-72 can be purchased from the Palgrave MacMillan website or as an eBook from various distributors.