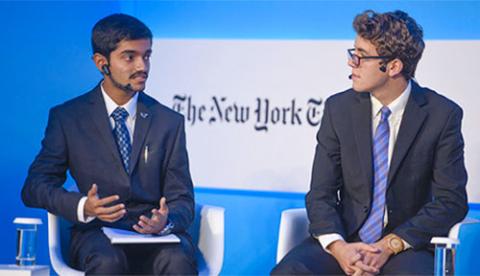 With a combined major in History and Art History, and minors in Environmental Science, Italian Studies, and Germanic Studies, Nitish’s interdisciplinary background made him a standout candidate. Describing his application he said, “I discussed the positive impact that art museums and language education can have on democracy today. Heritage should be embraced throughout the democratic process.”

The theme of this year’s forum, ‘Solutions for a Changing World,’ addressed important questions about globalization, international cooperation, and the enduring nature of democracy at a time of unique challenges around the world. As noted by Nitish, the theme speaks to the heart of Liberal Arts education and its mission to educate global citizens who can work together to solve complex problems and bring positive change to a turbulent world. Influential individuals who were present at the forum include Kofi Annan, former Secretary General of the United Nations; Hyeonseo Lee, a North Korean defector and human rights activist; and New York Times columnists Roger Cohen and Paul Krugman.

Nitish was able to participate in the forum thanks to Franklin’s membership in the Global Liberal Arts Alliance (GLAA). Richard A. Detweiler, founder and President of the GLAA remarked that, “we were taken by the breadth of Nitish’s knowledge and his ability to clearly articulate complex ideas.” GLAA is a synergistic partnership among universities that aims to strengthen liberal arts education through expertise and experience sharing.

Nitish believes that his participation in the Forum will help him achieve his future goals: “I want to work in the conservation of heritage for museums, and I met great people from UNESCO who are involved in this task.”